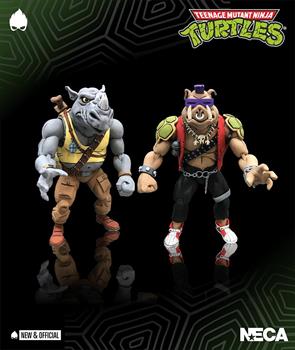 The Teenage Mutant Ninja Turtles first animated series ran from 1987 to 1996 and introduced the Turtles as four wise-cracking, pizza obsessed heroes that fight the forces of evil from their sewer hideout. The animated series was also the first time each Turtle has his own coloured mask, where they previously had all worn red First released as a complete set by NECA at San Diego Comic Con in 2017, these radical 7” Scale figures of the classic animated Turtles are now available in collectible 2-Packs!

The latest editions to this fantastic line are Bebop and Rocksteady, the mutated muscle bound enforcers of Shedders army. This  2-pack includes two collectible figures and all of the interchangeable pieces and accessories you will need to recreate your favourite scenes from the iconic 1987 series!